Dwarf cats are domestic cats that are characterized by short legs.  They have a condition known as dwarfism. 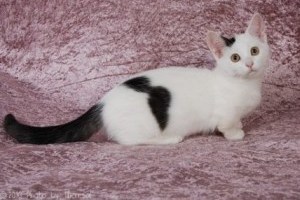 The first cat to be identified with short legs was a stray cat discovered in the USA in 1983. It was named the Munchkin cat.

Many dwarf cats have since been 'created' using the Munchkin as the foundation cat.

These new cat breeds are often referred to as 'Designer Cats'.

Some people do question the ethics of breeding dwarf cats with other cat breeds with different genetic mutations. We provide the information - you decide. 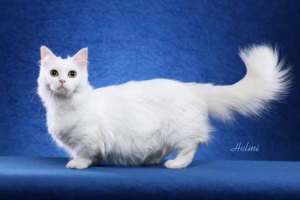 The Napoleon cat is a cross between the Persian cat and the Munchkin cat.

The aim of this breeding program was to create a miniature cat that combines the short legs of the Munchkin with the body-type and face of the sweet, doll-faced Persian. 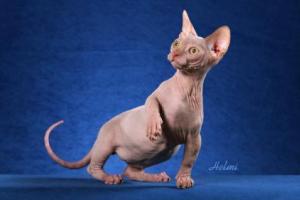 The Bambino cat is a new and rare hairless cat breed. This small, sturdy cat was created by crossing the hairless Canadian Sphynx and the short-legged Munchkin Cat. 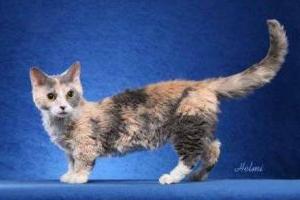 The Lambkin is cat developed by an American breeder, Terri Harris. This miniature breed was created by crossing two established cat breeds with unique genetic mutations.

It combines the short-legged Munchkin and the unusual curly-coat of the Selkirk Rex. The result of this union is a cute curly coated cat with short legs. 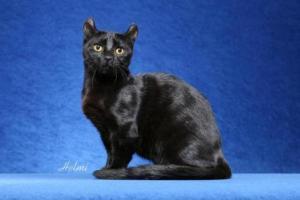 The Kinkalow cat was created by Terri Harris in 1997.

This cat is the result of crossing two cat breeds with different genetic mutations. It combines the short legs of the Munchkin cat and the curly ears of the American Curl.

The breed is still 'under development' and as such,  a rare breed. 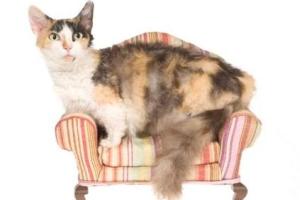 The Skookum cat is was created using two cat breeds with unique and different genetic mutations.

It combines the short legs of the Munchkin cat and the rexed (curly) coat of La Perm cats. 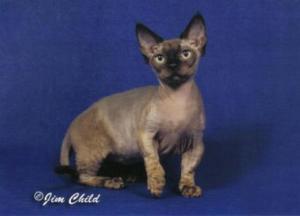 The Minskin cat is a miniature 'hairless' cat breed. It is distinguished by its short legs and fur points on its face, nose, ears, tail and legs.

Several established cat breeds were used in the creation of this dwarf cat - Munchkin (the original short-legged cat) and the Sphynx (Canadian Hairless), the Burmese and the Devon Rex.

The Genetta cat was created by Shannon Kiley in 2006.

It is a hybrid cat breed that was created using several cat breeds with unique and different genetic mutations, some of wild origin.

It combines the short legs of the Munchkin, the exotic spotted and marbled coat of Savannah cats, the Bengal,  Ocicats and the Oriental Shorthair.

The aim of this breeding program was to develop a cat that resembles the wild African Genet.

The Dwelf cat is a hybrid cat breed that was created using several cat breeds with unique and different features.

It combines the short legs of the Munchkin cat with the suede hairlessness of the Sphynx  and the curled ears of the American Curl. Like all the dwarf cats, the Dwelf is considered a new cat breed.

about the dwarf gene

In cats the condition is referred to as hypo-chondroplasia and in humans as achondroplasia.

What happens with hypo-chondroplasia in cats is that as the body grows, the legs do not develop and the torso becomes shorter and thicker.  Whilst the head is in fact normal in size, it appears to be large compared to the under-developed  legs.

Achondroplasia is defined as a lack of cartilage formation, essentially, it’s a condition where the conversion of cartilage to bone is retarded.

The protein that is involved in the proper formation of bone is in some way affected by a genetic mutation. This protein becomes over-active which results in mal-formation of the skeleton and bones.

Other factors that may cause dwarfism is a deficiency of growth hormones or chromosome abnormalities.