The American Bobtail cat should not be confused with the American wild cat called the Bobcat.

Then there is (or was) the Rabbit Cat,  a form of bobtail which was once found on the eastern seaboard of the United States - this cat, it would appear, is now extinct and also not related to the American Bobtail. 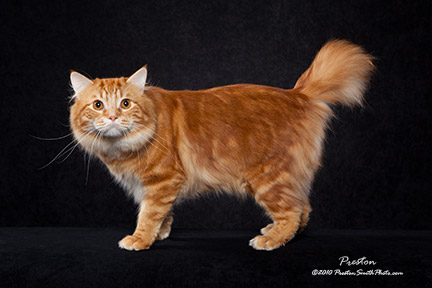 Whilst there are other bobtail cats - i.e. Japanese Bobtail, Kurilian, Pixie Bob and Manx they are in no way related to the American Bobtail.

Apart from its short tail, this kitty does have a host of identifiable features that will assist you in recognizing the breed.

The American Bobtail is a powerful and heavy cat with strong bones and muscles. Its medium-length legs complement the torso displaying powerful muscles and strong bones.

The tail should be flexible and can be slightly curled or even 'knotted'. Despite the length, this little tail has a good plume and long, shaggy, thick hair covers the tail.

The eyes are described as alert, large, oval (or almond -shaped) and are deep set and spaced quite wide apart.  The color of the eyes is appropriate to the color of the coat.

A distinctive feature is the 'brow' above the eyes that gives the cat a 'hunting gaze'.

To complete the picture, ears are 'alert' with rounded tips and cats with tufted or lynx-tipped ears are preferred. 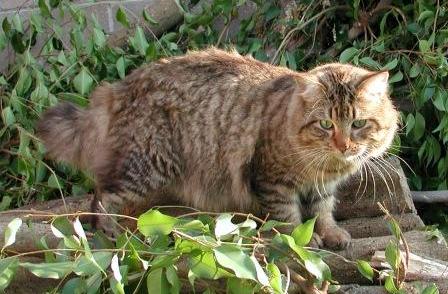 In this variety the fur is medium in length and slightly shaggy.

Whilst they do have a double coat, it should not be dense and should not matt. In the longhair version, the hair on the tail and ruff is longer.

The coat is semi-dense and characterized by a rigid or hard top coat and soft, downy undercoat.

In both the long and shorthair cats, the double coat is shaggy and harsh rather than fluffy.

In terms of color and patterns - you will be able to choose from a wide array of shades, colors and patterns. 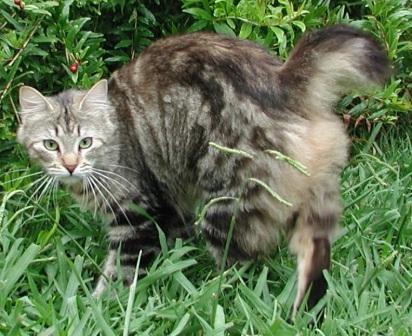 Most reputable cat breeders have contracts that stipulate that the cat must be kept indoors only. This is understandable as these beauties are skilled escape artists.

American Bobtail cats are suited to indoor and outdoor living, but 'outdoors' as described below.

An enclosed garden means one that is covered on all 4 sides, including the roof. If your cat has direct access from your home to a large enclosure of this type they will love the opportunity to roam.

The American Bobtail cat is child-friendly, but younger children need to be taught how to handle and carry a cat or kitten. No respectable cat will tolerate rough handling.

If you have other pets at home it may please you to know that this kitty does get on with other pets.

The introduction of a new pet needs to be done gradually and pet owners should always respect the 'rights' of the resident pets when introducing a new addition to the family.

We asked a couple of breeders and owners to provide their view on the temperament and behavior of the American Bobtail.

Some breeders described their cats as very active, athletic, energetic, playful and friendly.

Conversely, others described their cats as calm, patient and gentle cats who do not tolerate solitude.

There was certainly agreement that American Bobtail cats are intelligent cats with dog-type personalities.

They love to greet you at the door and love a game of fetch and can be quite clown-like in their actions.

They are loving and devoted to their humans and are tolerant of children. They do accept being handled and being carried around.

They are keen travelers and can also be lead trained, which means they can be taken for walks.

The American Bobtail is not very vocal - they tend to 'chirp and trill' rather than meow. Their voice is described as 'rambling and scratchy'.

Very little grooming is required for the shorthaired version except for a weekly brush.

The longhaired American Bobtail cat will need to be brushed at least two to three times a week.

For tips and advice, visit our cat hair care guide.

This is a healthy and robust breed with no hereditary or genetic cat health issues.

To keep your cat healthy make sure that it receives all its vaccinations. We also recommend an annual trip to the vet for a check-up, dental cleaning and de-worming.

Note: 'Rumpies' (cats with no tails) could signify spinal problems.

Bobtails have tails, even though the tail is short, some tail must be present.

diet | average weight of the bobtail

Always feed your cat the best nutritionally and well balanced cat food that you can afford.

Your cat should always have access to clean and fresh drinking water.

You should avoid giving your cat milk and excessive treats or table scraps.

Visit our informative pages about cat food and cat treats if you are unsure about any aspect of your cat's nutrition.

life expectancy of the bobtail cat

The American Bobtail cat has a long life expectancy.

A well cared for cat that lives indoors can live to between 12 and 20 years. 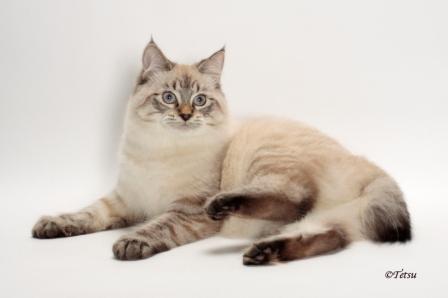