Burmese Cats appear to have diverse roots! Manuscripts dating back to 1350 have been found that trace Burmese to Ayudha in Thailand (then Siam). 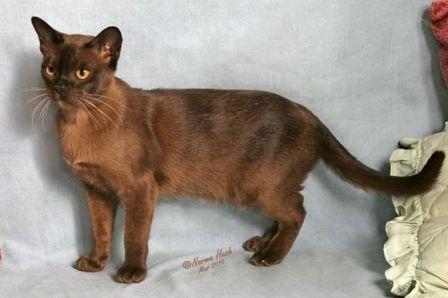 There are also ancient texts from Thailand dating back to the 16th and 17th Century that depict cats similar to the Burmese of today.

In fact, Burmese-type cats have been documented in various countries in South East Asia.

'Rajah' cats, that resemble the Burmese, are known to have roamed the Buddhist Temples of Burma around the 16th century.

A physician by the name of J C Thompson imported a brown cat from Burma to the USA in 1930.

The cat was known as Wong Mau - a Burmese/Siamese mix. (which today is called a Tonkinese).

Wong Mau was a beautiful, mahogany-brown cat with brilliant yellow eyes. The only problem was that poor Wong Mau didn't have a mate!

the creation of the burmese cat

Dr Thompson was so taken by this cat's beauty and personality that he decided to mate Wong Mau with one of his chocolate point Siamese called Tai Mau.

One of Wong and Tai's solid brown offspring was later back-crossed with its mother and this mating produced a litter of all solid brown kittens - and so Burmese cats came to be.

So by all accounts, the Burmese has its roots in Burma, but was developed in the USA.

It's important to remember, that Burmese do occur naturally in Burma and other SE Asian regions.

To ensure genetic diversity and to extend the gene pool, additional cats were imported from Burma to the USA in 1942.

American breeders then concentrated on perfecting the sable-brown Burmese, by eliminating their darker points and barred markings. 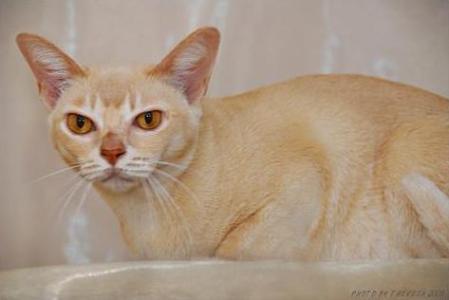 Burmese were introduced to Britain around 1949.

Interestingly, some governing bodies still only recognize dark Brown cats and classify all other colors as Malayan Cats.

As a result of this, there are two recognized cat breed standards:

1930 - Wong Mau imported into the USA from Burma

Other cats owe their existence to the Burmese.

The Burmilla was 'accidentally' created by a Burmese/Persian-Chinchilla cross.

The Long-haired Burmese is known as the Tiffanie cat (not to be mistaken for the Chantilly/Tiffany, which is a different breed).

The Bombay cat which resembles the black Panther was also developed using the Burmese and American Shorthair.