The Burmese cat breed could be described as a 'little military tank draped in glossy satin'. This is a dominant cat that is also known as the Rajah cat.

Whilst the Burmese may have its roots in Burma, it was developed in the USA and today this domestic cat is bred around the world. 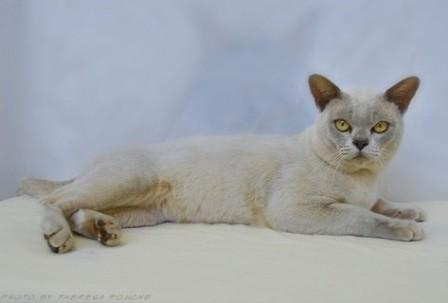 It is no surprise that people passionate about the cat breed would continue to develop the breed resulting in additional colors and other physical differences.

As a reuslt of this, the Burmese has two recognized breed standards - the American Type and British-European Type. 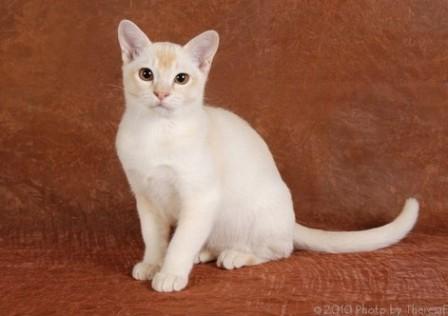 The Burmese cat breed adapts well to apartment living, but like many cats, they do love the freedom of an enclosed, safe and escape-proof garden.

They prefer a home where they have companionship a great deal of the time - they do not enjoy solitude!

How well do they adapt to children? They are child-friendly cats and make wonderful companions for kids. Younger children must be taught how to handle cats. Tail and ear pulling is not considered play and most cats will react negatively to rough play.

Is the Burmese cat animal friendly? They are, but they prefer human company. They don't really appreciate the company of other cats.

We have asked many owners about the temperament of their Burmese cat.

Temperaments and personality differ from cat to cat - genetics and 'upbringing' all play a part.

It was probably for this reason that we found conflicting views.

The Burmese has been described as extrovert, demanding, energetic and exuberant.

They are intelligent, have strong personalities and can be stubborn. They are fearless and brave.

Burmese cats can be dominant cats who like to express this 'power' with other cats, but then again, some thrive on the companionship of other cats.

It is a very talkative cat but their voices tend to be softer and less harsh than the Siamese cat, but they do have a loud husky voice.

The Burmese cat breed is also an affectionate, loving cat. They adore their owners and love the company of their people.

Even though they are busy, active cats, they will always find the time for a cuddle and the comfort of a warm lap.

These intelligent cats are very active and playful and bore very easily, so it's important to provide them with loads of toys and a companion.

The long and short of it is that they are wonderful companions and you'll never have a dull moment.

The Burmese cat breed is a shorthaired cat and as such, a low maintenance  breed.

Using a grooming glove or a rubber brush once or twice a week will remove all dead hair without harming the coat.

Bathing is not often required. A show cat should be bathed a week before show day to allow the coat to recover its natural oils.

Our cat care pages will assist you with all aspects of cat grooming - dental, eyes, fur and claws. 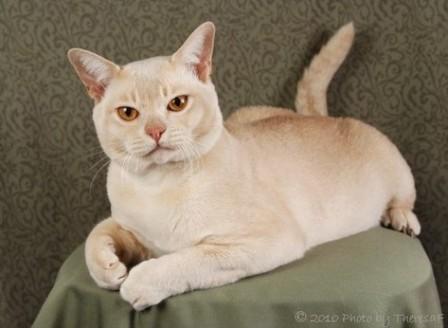 Whilst they are generally healthy cats, some breeding lines may suffer from health problems or be more prone to the following conditions:

The American type carries a gene responsible for severe craniofacial deformity which is fatal. Kittens generally die at birth.

Cat health insurance should be considered, not just for the Burmese, but for all cats. Please do vaccinate you cat against feline infectious diseases.

Burmese require no special diet, but saying this, they do need a well blanced diet.  Our cat nutrition pages will provide some guidance on cat food options. Clean, fresh water must be provided daily.

The Burmese cat has a life span of about 15 years - this is the average age and is dependent of many factors such as diet, exercise, annual vaccinations and the general care of your cat. 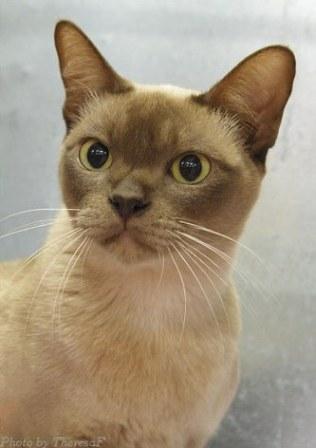