Bombay Cat
The Creation of a Parlor Panther

If you are superstitious, then the black Bombay cat may not be for you!

If you believe that black cats are a sign of good luck, wealth, love and good fortune, then this beauty with piercing copper-gold eyes is the perfect addition to your family. 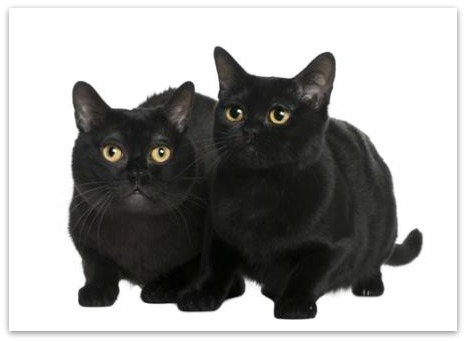 The late cat breeder, Nikki Horner, from Kentucky, USA, had often heard people say: 'I'd love to own a panther'. These words inspired her to create a black cat which resembles the wild black Panther (black leopard) of Asia.

Ms Horner started working on her 'creation' in 1958.

After much thought, she selected a female Burmese with a sable-colored coat and for the male she chose an American Shorthair cat with black coloring.

Whilst the initial attempts failed to produce a perfect 'black panther', this did not deter her, she tried again using different breeding stock, this time her results were pleasing.

She named the cat breed Bombay (now Mumbai, India), chosen to suggest the homeland of the true black leopard.

Through a long process of inbreeding, out-crossing and careful selection, she was consistently able to produce a black cat.

Initially the cat shared the characteristics of the foundation cats, the Burmese cat and the American Shorthair, but the Burmese-type was ultimately selected for the look of today.

On the other side of the Atlantic, British breeders used Burmese and British Shorthairs to develop their own version of a black cat which is also called a Bombay - this has given rise to some confusion.

In Britain, however, the Bombay is classified as a variety of the Asian shorthair.

This black domestic cat is relatively unknown in Europe with the first cat, called Opium, arriving in France in 1989.