The Snowshoe cat is a rare cat breed that was created in the United States in 1960.

Siamese kittens are sometimes born with white toes and paws.

In the early days Siamese cat breeders considered this a fault and tried to eradicate the recessive gene responsible for this trait.

A group of Siamese cat breeders in the 1950's found this characteristic quite charming and went about creating a cat that would have the points of the Siamese and gloved white paws of the Birman cat.

Sadly, whether due to the difficulty in producing the desired coat markings or as a result of opposition from Siamese cat breeders, the breed faded into obscurity.

In the 1960's, Dorothy Hinds-Daugherty, a Siamese cat breeder from Philadelphia, US noticed white-pawed kittens in her Siamese cat litters.

Ms Hinds-Daugherty set about developing this breed and stabilizing the so-called 'fault'.

By crossing the bi-color American Shorthair and Siamse cats,  she finally, after much frustration, achieved the desired look (i.e. the tuxedo markings and popular 'V' facial markings). 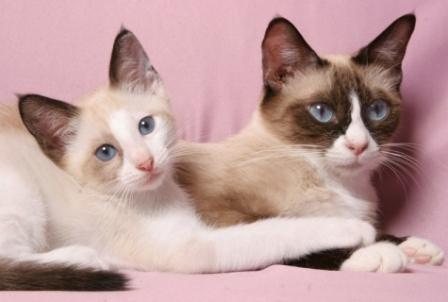 Ms Hinds-Daugherty eventually handed over the reigns to Vikki Olander.

Ms Olander is credited for writing the breed standard and for getting the breed recognized by the various cat registries in the United States:

The Cat Fanciers of America does not recognize the breed as yet.

It is exceptionally difficult to achieve the patterns and markings that conform to the accepted breed standard and this makes the Snowshoe kitty a very rare cat breed.

The original Snowshoe cat resembled the traditional or applehead Siamese.

Due to the inclusion of the American Shorthair in the breeding program, it was slightly more solid.

Today, the Siamese is a more elongated and slender cat, so the two cats will most certainly not be confused.

In the early days of the breed, many people thought that the Snowshoe was a shorthaired Birman. 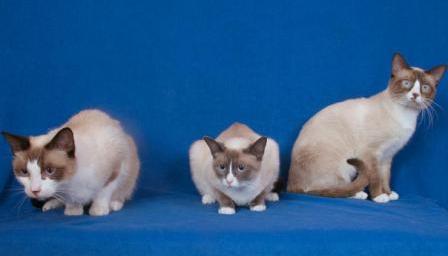