The Savannah cat is a cross between a domestic cat and wild African Serval Cat.

This is a new and rare cat breed, but one that is rapidly growing in popularity amongst people looking for an exotic cat with wild looks.

There is a fair amount of controversy surrounding the breed with many conservationists opposed to the crossing of wild cats to domestic cats and keeping Serval cats in captivity. 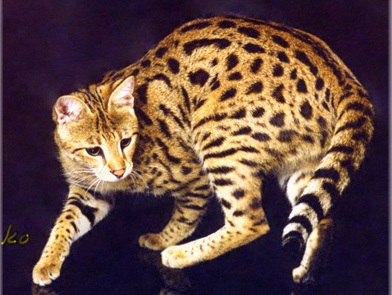 When describing the Savannah, it's important to understand that the features will differ in a first generation cross vs a cat that is several generations removed from a domestic / Serval cross.

Generally speaking, this is a substantial cat that is characterized by its slim, elongated legs and this produces a rather large cat.

Female cats are generally smaller than their male counterparts. 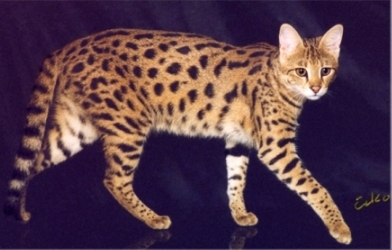 The Savannah cat's torso is described as firm, athletic and lean but certainly not delicate! The cat has well developed and firm muscles and a strong bone structure.

To complement the body, the neck is also long and lean and the tail is of medium length and thickness.

This hybrid cat has a small head, but the head is in proportion to the body and the shape of the head is described as triangular (with all sides of equal length).

Its medium sized eyes are set fairly deeply under what is described as an accentuated brow or a brow with a hood. 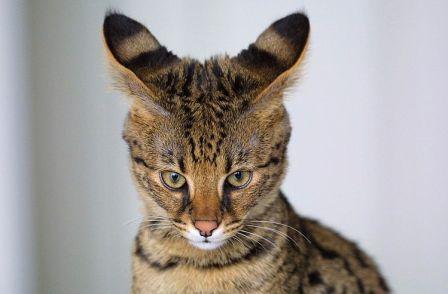 A distinctive feature of the Savannah cat is the black, 'tear-stain' fur marking that runs from the corner of the eye down, alongside the nose. (Markings similar to the Cheetah).

There is no relationship between eye and coat color, meaning that all eye colors are accepted.

Like the Serval, the Savannah cat has sizable ears, with a broad base and rounded tips. The ears are positioned on top of the head, as opposed to the sides.

The back of the ears are characterized by ocelli, which are white markings, bordered by black stripes on the top and bottom and resemble eyes!

The Savannah cat has a short, close-lying coat and the fur has a slightly coarse feel which is typical of wild cats.

Basically, the guard hairs are responsible for the coarseness, whilst the hair that forms the undercoat and fur that creates the markings or pattern is softer.

Savannahs are spotted cats and these spots can be either round or oval-elongated. (The rosette spots seen on Bengal cats are not accepted in this cat).

Other distinctive fur markings include the stripes that run in parallel from the back of the head, along and down the shoulders. These stripes eventually 'break-up' and become spots.

The Savannah is best suited to outdoor living, but we must stress that as it is able to jump to great heights, you will need to create a large outdoor, escape-proof enclosure with a covered roof.

Many breeders will insist that the cat be kept indoors which is not a bad idea as these are seasoned escape artists.

Having said this, you will need to ensure that your cat cannot escape through an open window or door. It would be safer to install safety screens on doors and windows.

This is a high-energy cat, so you will need to create an indoor adventure zone to alleviate boredom and destructive behaviour.

It is a dominant cat and best suited to a home with dogs rather than other cats.

The cat is possibly better suited to a home with older children. Younger children need supervision when playing with the Savannah and this is due to its size and sometimes unpredictable behaviour.

It is also recommended that toys and wands, not hands, be used when playing with the Savannah cat.

Owners describe their cats as intensely energetic and lively and they add that their cats have so much energy that they tend to tire even the most playful dog.

They love to romp and jump and are able to jump 8ft (2.5 m) high from a standing position.

Don't be surprised to find the cat perching on the top of cupboards, refrigerators and doors and beware of the unexpected pounce as you walk through the door!

These cats are quite dog-like and display the same loyalty as our canine friends. They love high action play and the game of fetch is a favorite.

They also love their owners who they follow around.  Whilst they are independent, they do not tolerate solitude and a cat that is left alone for extended periods will become destructive.

Savannahs are very loyal cats that generally form a strong bond with the family and in many instances with one particular family member. Savannah's are sociable cats with very outgoing personalities.

They are not lazy lap cats, but cats that prefer to display affection with head butts and by following you around.

These cats are inquisitive and adventurous and have been known to open cupboard doors.

Unlike many cats, the Savannah generally adores water.

If you love to go for walks, then the good news is that the Savannah cat can be lead trained and will happily join you for a brisk walk.

Like their ancestor, the wild Serval Cat, the Savannah communicates via a high-pitched chirp or hiss loudly, similar to the hiss of a snake.

For grooming tips and general care take a look at the our extensive cat care guide.

The Savannah is a healthy cat breed but some cats are born with smaller livers and it is for this reason that it is recommended that caution is exercised when administering certain medication.

Hybrid cats do need to be vaccinated against all the common infectious feline diseases.

diet | average weight of the savannah

You need to feed your cat a well balanced, premium cat food.

Some breeders feed their Savannah Cats raw cat food which is an important consideration given their wild roots.

life expectancy of the savannah cat

A healthy, well cared for Savannah has a life span of about 15 years.