Munchkin Cats
The History of a Dwarf Breed

Munchkin Cats had humble beginnings in Louisiana, USA. We take a look at the the discovery of this cat and follow the development of this gorgeous short legged breed. 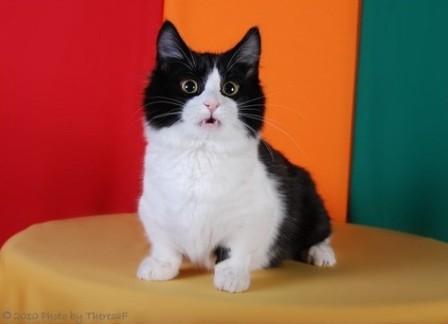 In 1983, a short-legged cat, living under a trailer, was discovered by Sandra Hochenedel. This special black cat was named Blackberry.

Blackberry had a further surprise - she was pregnant.  She produced a litter of kittens, half of which had short legs. Unbeknown to her, she was to become the foundation female of a new cat breed.

One of these unusual short-legged kittens, a male named Toulouse, was given to Kay La France.

Ms La France went on to establish a free-breeding colony of Munchkins on her plantation. 'Normal' legged domestic cats were used as outcrosses to ensure a healthy and diverse gene pool.

This diminutive cat breed was named after the fictional characters from Munchkin Country that appeared in the 1900 novel, The Wizard of Oz.

It may be of interest to know that this spontaneous automsomal dominant mutation that results in the short-legged trait is not new.

In 1944 this mutation was first reported in the United Kingdom by Dr W William-Jones, sadly these cats did not survive WWII.

In 1953 there were also reports of similar healthy, short-legged cats in Stalingrad, Russia.

Mrs Ellen Kasten of New York discovered a short-legged kitten in 1964 which she named 'Little One'. (The cat was never used for breeding).

In 1970, thirteen years before the discovery of Blackberry, cats were also reported in New England.

The first cats were shown in New York's Madison Square Garden in 1991.

These cats evoked a mix reaction.

Those who were opposed to breeding with these dwarf cats had concerns about health issues and felt that these cats were vulnerable to outside threats.

On the flip side,  there were loyal fans that were adamant that the Munchkin was a healthy viable breed.

The Madison Square Garden show resulted in an increased awareness of this short-legged mutation and many cats were found throughout the US.

The new cats and kittens were added to the existing breeding program thereby increasing the gene pool.

This caused upheaval within the ranks of TICA who felt that the recognition of the breed was an insult to ethical breeders.

TICA's resident geneticist, Dr Solveig Pflueger did do a full assessment of the diminutive cat and found that is was 'physically sound'!

The CFA, GCCF and FiFe do not currently recognize this, and many other breeds.

The Munchkin is accepted by the United Feline Organization, the American Association of Cat Enthusiasts, the Waratah National Cat Association of Australia and the Southern African Cat Council.

why the breed is controversial

Short-legged cats as mentioned earlier on are as a result of a genetic mutation.

Man played no part in their initial development - it is a naturally occurring phenomenon that occurs amongst many free-breeding cats.

Essentially, the protein responsible for forming bone is in some way affected by the mutation, causing it to be over-active thus negatively affecting the development of the skeleton and the proper formation of bone.

Achondroplastic means 'without cartilage formation' it is in fact a poor ossification, or poor conversion of cartilage to bone!

In Humans, this condition is associated with short legs AND an enlarged head.

In cats, the gene causing short legs does not cause an enlarged head which may indicate that it is not the same gene.

Whilst the Munchkin is compared to the Dachshund, Corgi and Basset it would appear that there are very few reported cases of cats experiencing the same skeletal abnormalities suffered by their canine counterparts.

The other concern that those opposed to the breeding of the Munchkins have is that they believe that the cat's stature makes it difficult for them to defend themselves against dogs and other cats thereby making them vulnerable.

The argument against this is that many short-legged animals, ferrets, badgers and dogs with short legs have all adapted and cope well despite their short stature and Munchkins are no different.

Whilst their short legs may prevent them from jumping up on high places, their mobility is generally not hindered at all. 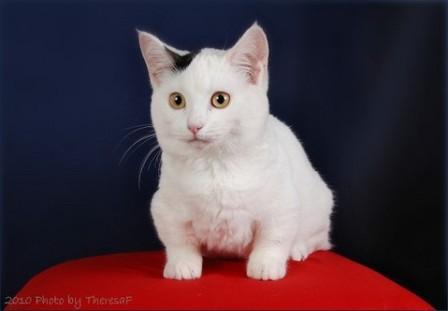