The history of Persian cats is a bit of a mystery!

The truth is that the precise origin of this longhaired cat breed is unknown, but as the name denotes, it is widely believed that they originated from Persia (modern day Iran).

There are various schools of thought. 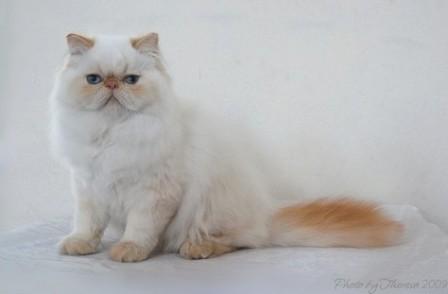 Digging through the archives we found records that suggest that Pietro della Valle, an Italian explorer who traveled extensively through Asia, the Middle East and India during the 17th century, brought the first longhaired cats (Persians) to Italy in the 17th century.

At around the same time, Nicolas-Claude Fabri de Peiresc, a French antiquary and astronomer, is thought to have brought the first longhaired cats (Turkish Angora) from Turkey to France.

It is possible that these longhaired cats were interbred, leading to the belief that the Persian and Turkish Angora are one and the same breed!

The longhaired cats arrived in England in the 19th Century and were originally classed as Longhairs.....today they are known as Persians!

The British undertook an extensive breeding program to establish a range of colors and to improve the quality of the fur.

Today, Britain is considered the 'home' of Long-haired cat breeds. They were brought to the United States in the 1930's and today we find a wide selection of colors here.

Whilst the history of Persian cats is shrouded in mystery, it is no secret that they are one of the most famous of all the cat breeds.

Persian cats are considered to be the most popular cat breed in the world.

A calm and gentle, longhaired cat breed - one that requires much pampering. This cat is instantly recognizable by its glorious and luxurious long flowing coat and distinctive 'pansy-like' (brachycephalic) or flattened face.

It should be noted that the CFA (Cat Fanciers' Association) in the United States and GCCF (Governing Council of the Cat Fancy) in the United Kingdom have slightly different breed standards.

The names of the colors may also vary from registry to registry.

We suggest that you consult a cat registry for the breed standards pertinent to your country.

In America in the early 1930's a Persian cat was crossed with a Siamese Cat - the result of this union was a longhaired cat with colorpoints.

The Americans revived this breeding program in the 1960's - in the US, the Colorpoint Persian is known as the Himalayan cat.

In Europe, the Khmer, which is a longhaired colorpoint was crossed with a Persian to create a pointed Persian.

Today, the Khmer and Colorpoint Persian are classed in one group - the Persian. 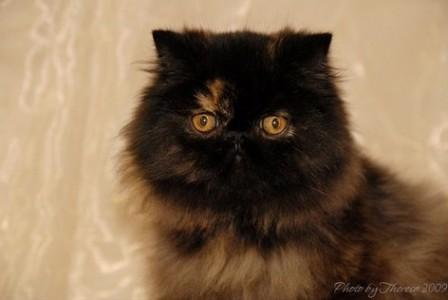