The Don Sphynx Cat, also known as the Donskoy, Russian Hairless cat and the Don Hairless cat,  was 'discovered' in 1987 in Rostov-on-Don. 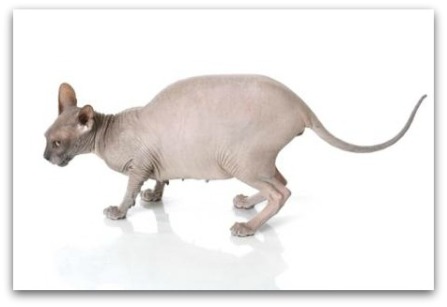 Rostov-na-Donu is a city situated on the Don River in the Southern Federal District of Russia.

It was here, the story goes, that Professor Elena Kovaleva, came across a couple of young boys, keeping themselves 'entertained' playing soccer with a bag that held the sweetest female, cream-and-blue kitten! The rescued kitten was named Varvara (aka Varya).

The kitten suffered hair loss which was thought to be as a result of illness and trauma.

Despite all efforts, no amount of treatment could stem this 'condition'.

When Varvara finally had kittens, her litter had an assortment of hairless and haired kittens. It wasn't long before the haired kittens too started losing their hair.

The general consensus was that the kittens were of ill-health. Fortunately,

Ms Nemykina is the breeder credited for developing the Donskoy - a truly Russian breed.

The breeds name 'Don Sphynx' was named after the 'Don' River where Varvara was first rescued and 'Sphynx' after the Canadian Hairless cat - the Sphynx.

Ms Nemykina outcrossed the Donskoy to European Shorthairs in an attempt to increase the number of foundation cats thereby improving the gene pool.

Varya is the foundation female that resulted not only in the Don Sphynx (Russian Hairless cat), but also the Peterbald (aka Petersburg Sphynx).

The Peterbald hairless cat breed was originally developed by crossing the Donskoy and the Siamese cat or the Oriental Shorthair cat.

The Don Sphynx is considered a rare cat breed and a fairly new cat breed.

The Donskoy Sphynx was brought to the United States in 2000.

The International Cat Association (TICA) recognized the breed in 2005. The Donskoy currently (2013) enjoys Preliminary New Breed Status at TICA. This is the level prior to advanced new breeds and then championship status.

The CFA (Cat Fanciers Association) do not as yet recognize the breed.

Sherri Mossop of Possoms Cattery is credited for bringing the first cat into the US and for starting the Donskoy Federation of America Club and the Don Hairless Breed Club.