So where does this pixie-like Devon Rex cat come from?

In 1960, near an abandoned tin mine in Buckfastleigh, Devon, England, a curly-coated feral tomcat mated with a stray female cat - and that's where the story begins. 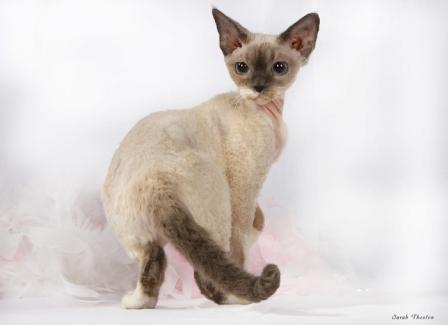 Ms Beryl Cox gave refuge to this tortoiseshell and white female stray and the cat 'rewarded' her by giving birth to a litter of kittens.

A single kitten in the litter, a brownish-black male, was born with a curly coat and a cascade of curls on his tail.

The kitten was named Kirlee and he was to become the founding father of the Devon Rex breed.

Meanwhile, in Cornwall, England, cat breeders had been struggling for 10 years to increase the gene pool of their rexed cat called the Cornish Rex.

However, when his offspring were bred back to Kallibunker, 50 % of the kittens were curly coated and 50% straight-coated.

As fate would have it, an article published in an English newspaper, touted the Cornish Rex as Britain's only rexed cat.

Ms Cox, wrote to the breeders advising that she too had a curly coated cat.

The Cornish Rex breeders were excited about this discovery and Agnes and Susan Watts purchased Kirlee and returned to Cornwall.

Their aim was to include the Devon curly-coated cat in their cat breeding program.

Kirlee was mated with several rex queens, but despite repeated breedings, no curly-coated kittens were produced.

Finally breeders had to accept that Kallibunker and Kirlee did not carry the same genetic make-up.

The Cornish Rex carried a gene called Gene I Rex and the Devon curly coat was known as Gene II.

A cat breeder, who formed part of the breeding program group, kept a female straight haired kitten which she bred back to the father cat - Kirlee - this union resulted in 1 curly-coated cat and 2 straight coated kittens.

This proved that the gene was simple recessive. In an effort to establish the Devon cat gene, Kirlee was extensively inbred. Inbreeding was the only way this curly-coat could be produced.

As all Devon Rex cats evolved from Kirlee, the gene pool was small and heavily inbred.

This unfortunately resulted in a fatal neurological condition that caused muscle spasticity.

To avoid this condition, cat breeders started using American and British Shorthairs in a selective breeding program to increase and ensure a diverse gene pool.

This meant that the first outcross generation only produced straight-haired cats and in the second generation, only 50 % of the kittens had curly coats.

Another genetic condition that needs to be screened for in this cat is parental blood incompatibility.

If a Type-A male is bred with a Type B female, the antibodies will be passed through mother's milk and the kittens will die.

Fortunately, due to testing, screening and selective outcrossing the above conditions have significantly reduced over the years. 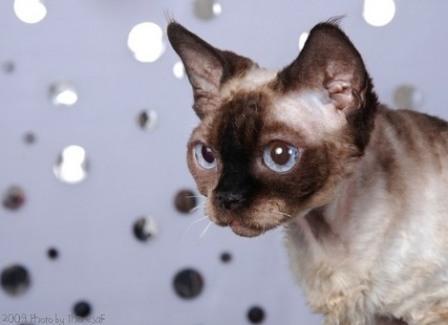 curly-coated cats arrive in the usa

The Devon curly coat reached American shores in 1968 and it is thanks to the tireless work done by Marion White and Shirley Lambert, that the cat breed was finally established in the US.

For many years the CFA recognized the Cornish and Devon cats as one breed.

It was only after 1970 that the Devon was granted separate breed status.

.....and that is the Devon cat history in a nutshell!