Balinese Cats are Longhaired Siamese and as such, have their origin in Thailand, not Bali as the name might have you believe. 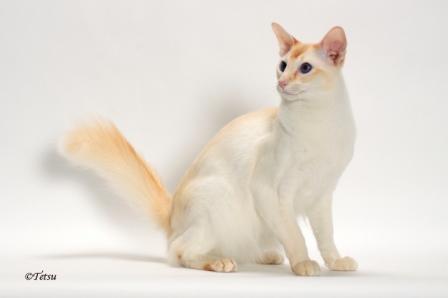 Breeders were not sure if this longhair was a spontaneous mutation or whether it was as a result of an earlier out-crossing with a longhaired cat such as the Angora.

Helen Smith, another breeder from the USA, followed in Mrs Dorsey's footsteps in the 1960's.

Mrs Smith is also credited with naming the cat. These graceful cats reminded her of the elegant temple dancers from Bali, and in an attempt to retain some of their Asian roots, she called them Balinese.

Mrs Dorsey sold her cattery in 1965. The new owner, Sylvia Holland, is credited with advancing the breed and for working with other breeders to further establish the breed.

Today Balinese kitties are recognized by most major cat registries around the world.

In the 1970's a group of Balinese breeders in America thought it would be interesting to also breed Balinese in Colorpoint Shorthair colors.

This caused some decent amongst 'die-hard' Balinese breeders as they were concerned that it might cause some confusion and affect the show-status of the Balinese.

It was finally agreed, that any Longhaired Siamese deviating in color from the four recognized colors (i.e. Seal. Blue, Chocolate and Lilac Point), would be known under a different name - the Javanese cat breed.

Some associations, apart from the CFA, recognize all colors as being Balinese, i.e. there is no distinction between the Javanese and Balinese.

In Australia, the Longhaired Siamese is known as an Oriental Longhair.

Sorry folks, we know this is confusing!