Turkish Van cats are natural breeds, meaning that man played no part in their development.

It is believed that these prized domestic cats originated in Eastern Turkey.

Cats matching their description are also found in other parts of SW Asia including Iran, Iraq and South West Russia. 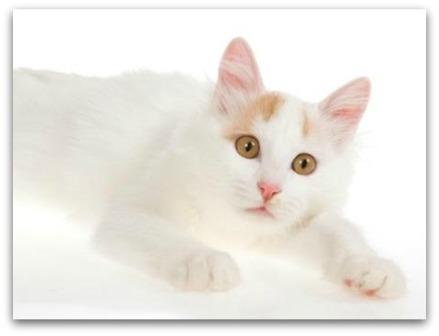 In the remote and isolated area of Lake Van, eastern Turkey, these cats still continue to breed without any human interference.

These rare and ancient cat breeds are considered treasures in their homeland.

The word 'Van' is commonly used to name lakes, towns and villages and naming the cat Turkish Van came as no surprise.

Whilst these white cats have existed in Turkey since the 1700's, it was not until 1955 that the 'West' discovered them.

Two British tourists, Sonia Halliday and Laura Lushington, visiting Turkey were so enamored with the cat, that they brought two kittens back to the United Kingdom.

The kittens, Van Atilla and Van Guzelli Iskenderun, were bred true, confirming that this was indeed a natural cat breed.

Lushington continued to import cats from Turkey and it was due to her tireless efforts that the breed finally received recognition by the GCCF and FiFe in 1969.

The cats were originally know in the United Kingdom as Turkish Cats, but later renamed.

It is surprising that they don't have an identity crisis, as over many years, they have also been referred to as Russian Longhairs and White Ringtail cats and descriptively as 'swimming Turkish van cats'.

Some experts believe that Turkish Cats are simply a color variation or larger variety of the Turkish Angora.

This of course is totally unfounded and when placed side-by-side the differences are clearly visible.

This said, it is possible that the same cat from different parts of Turkey were imported into Europe and that cat breeders were responsible for developing the differences that exist today.

The cat fancy recognize the breed as two distinctly different breeds - we will leave the debate to the experts!

It wasn't until 1982 that this cat breed arrived in the United States, but some records show that the cat breed was imported as early as 1970.

It received recognition by the CFA and TICA in 1994.

This is a rare cat breed, and along with the Turkish Angora is considered a national treasure in Turkey, but their numbers are dwindling.

In an attempt to re-establish the Turkish Angora Cat and the Turkish Van, we believe that the Turkish Ministry of Agriculture breed both these cat breeds at Ankara Zoo. 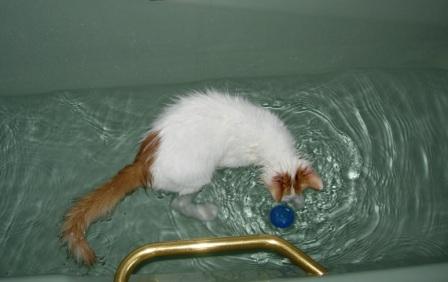