Looking at the Toyger cat pictures below one can't help but wonder how this magnificent cat came to be. 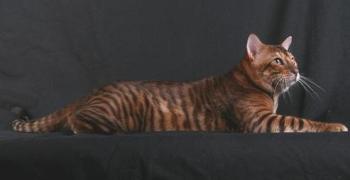 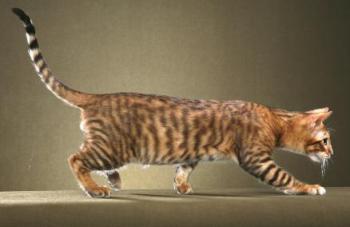 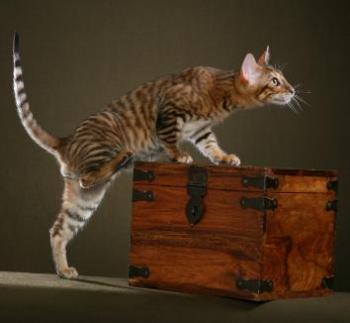 In the early 1980's Judy Sugden noticed that her Bengal cat had tabby markings on its temples.

In domestic cats, the temple area and head is usually free of tabby markings.

Ms Sugden, being the daughter of Jean Mill, the Bengal Cat founder-breeder, identified an opportunity to breed a cat with beautiful facial tabby markings resembling those seen in the wild Tiger.

In other words, this cat has a circular tabby pattern running across and around the face rather than stripes that run back and over the head.

With this in mind, a group of breeders led by Ms Sugden set about creating their designer cat breed.

The objective was to create a miniature tiger.

This cat is a tiger look-a-like, but with the temperament of a domestic cat.

Ms Sugden's large Bengal cat and a striped domestic shorthair cat were the foundation cats used for this breeding program.

Later, a feral cat with spots rather than tabby markings between the ears was brought to the United States from India and included in the program.

Toygers were accepted for registration with TICA (The International Cat Association) in 1993 and finally in 2007 it received Championship status - 27 years after the idea was conceived.

Many breeders still consider this cat to be 'work-in-progress' as they strive to achieve a cat with a broader nose and smaller and more rounded ears without the lynx tips. We think it's perfect!

The Toyger cat pictures above are courtesy of Animal Photography, Tetsu Yamazaki and the owner and breeder, Kim Chenault of Toygers of KC's Jungle Babes. Toyger: QGC Jungletrax Koudoutai

Return to Types of Cats > Pictures of Cats