The curly-coated Selkirk Rex cat originated in the United States in 1987. In the 'cat world' this is considered a fairly new cat breed. 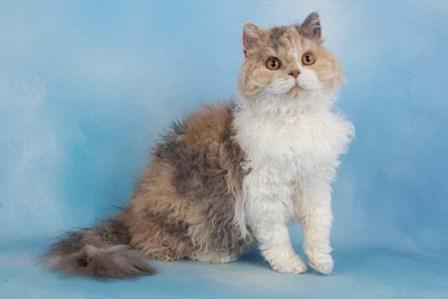 It resulted from a cross between a straight-haired house cat and a curly-coated male cat.

The offspring of this union produced a dilute tortie, curly-coated, female kitten who was later named Miss de Pesto of No Face.

Jeri Newman, a Persian cat breeder with a keen interest in genetics adopted this unusual kitten from the Bozeman Humane Society.

The curly-coated kitten was later crossed with Ms Newman's black Persian. This mating produced 6 kittens, 3 of the kittens had curly coats.

Miss de Pesto was later mated to one of her male offspring and once again she produced curly coated kittens. This confirmed that the curly coat was a result of an autosomal dominant gene.

Newman was infatuated with these curly coated cats, but believed that the general look of the cat could be improved.

She is quoted as saying that the cat looked like the world's worst Devon Rex with a Chartreux cat body!

To improve the already superb strong build and thick curly coat, she crossed Miss de Pesto with her Persians to achieve a rounder and shorter head and longer coat.

The result of this breeding program is the Selkirk Rex which we know today.

It is not sure whether Jeri Newman named the cat after the Selkirk Mountains or her father.

American and British Shorthair cats, Himalayans, Persian cats and the Exotic Shorthair cat have all been used to develop and enhance the Selkirk Rex cat breed.

Outcrosses to other breeds are scheduled to be discontinued.

The Selkirk Rex cat is accepted by most of the major cat associations internationally. It landed on the shores of Europe in 1990 and Australia in 1999, but they remain rare cat breeds. 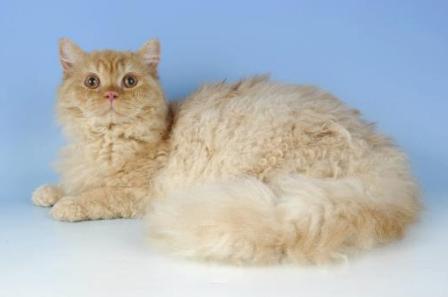 The most distinguishing feature of this cat is its curly coat, which has led to it been called a sheep cat or poodle cat.

The coat is luxurious and dense and soft to the touch. The coat displays a random arrangement of loose curls, which is generally more dramatic in the longhaired cat than the shorthaired variety.

The curl can be described as shaggy and unkempt, which is part of the cat's appeal.

The images above showcase the coat curl types

Whilst the entire coat is curly, the stomach, tail and neck appear to be curlier than the rest of the body.

There are no restrictions on coat color or pattern which means you will find these cats in a wide range of colors, shades and patterns.

Kittens are born with a curly coat and curly whiskers, but the curl does loosen over time and then begins to curl again at around nine months.

The cat's whiskers are unfortunately quite brittle and tend to break off as they grow. Adult cat's whiskers may show less curl and they present with fewer whiskers.

It is interesting to note that a change in hormones and climate has an effect on the degree that the coat curls.

The cat's coat only reaches maturity at around 24 months.

The Selkirk Rex cat is generally described as a sturdy, medium to large cat with a heavy bone structure and moderately long, strong legs and a medium length thick tail.

Its head can be described as broad, round and of medium size with full cheeks, a well developed and firm chin and well padded whisker pads with curly whiskers.

The Selkirk's ears are medium-sized and the inside of the ears are well furnished with curly hair.

This curly-coated cat has large, well-spaced and rounded eyes and the outside corners of the eyes turn slightly upwards resulting in a sweet expression.

Eye color is not related to coat color and any eye color is accepted. 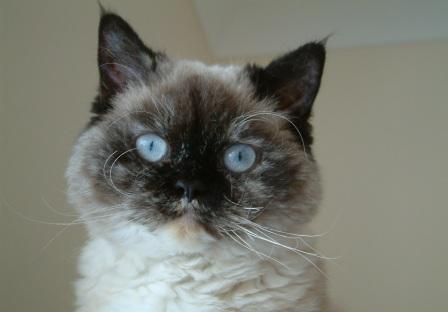 The Selkirk Rex cat is suited to indoor and outdoor living, but 'outdoors' does not mean roaming the streets. Outdoors refers to an escape-proof, enclosed cat run or garden.

Cat breeders and owners describe their cats as laid-back, easy-going, calm and gentle.

They can be playful and make ideal companion cats for the young and old.

They get on well with dogs and other cats.

The Selkirk Rex is a patient, tolerant and loving cat. It adores the company of its humans and as they are fairly sociable, they do better in a 2-cat family.

These cats have very sweet dispositions and they do love to cuddle and share your bed.

The Selkirk Rex cat tends to shed a fair amount of hair!

This cat needs to be gently or lightly combed twice a week to remove loose hair and to detangle the coat and undercoat. (Over-grooming will reduce the curl, so do not be tempted to groom to often).

Some cats are prone to a greasy coat which may require the occasional bath. They do have an unkempt appearance, but this does not mean the fur should be matted.

The cat's ears need to be cleaned weekly to avoid excess wax build up.  It's important to gently remove ear wax without damaging the ears.

Visit the chapter on cat hair care for great tips and advice on grooming longhaired cats.

Reputable breeders screen for these diseases, so it's important to establish this prior to adopting a kitten.

The ears are well furnished with curly hair which can result in irritation and excessive wax build-up and this can lead to ear infections.

Most longhair cats are prone to hairball, and scientifically formulated diets that reduce hairball is recommended.

Like all cats, they can contract the common infectious feline diseases and it is therefore important to vaccinate your cat.

Veterinary fees are expensive, so you should always consider medical cat insurance for your pet.

They do shed a fair amount and coupled with the long hair, it may be advisable to purchase food specific for longhaired cats which will assist in reducing hairball. (Selkirks are prone to hairball).

Life expectancy depends on numerous factors which are explained in detail in the chapter on how long do cats live.

Generally speaking the average life expectancy for these cats is about 14 years.