The first Scottish Fold cat breed made its appearance in 1961.

A white, barn cat called Suzie was born on the McRae's farm near Coupar Angus in the Tayside Region of Scotland.

What made her unique was that her ears folded forward and downward on her head resulting in a sweet 'teddy bear' 'owl' or 'pixie'-look'. 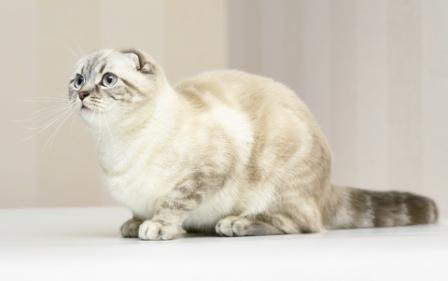 Most cats have erect, perky ears. The cartilage in kitten's ears usually start to harden after the 3rd day, but in the Scottish Fold cat breed this does not occur.

The cartilage in these cats generally folds or bends forward and downward and in some instances can even have a triple fold that results in the ear lying flat against the head.

Whilst Suzie was the first recorded cat of this kind in the west, there are references in magazines dating back to 1796 that mention similar cats in China with folded ears.

Mary and William Ross, breeders of British Shorthairs were enamored with Suzie and acquired one of her female, folded-ear kittens in 1963 - the kitten was named Snooks.

Regrettably, Suzie was killed by a motor car and thus only ever produced 2 kittens.

Snooks later gave birth to a male kitten named Snowball who in turn was crossed with a British Shorthair. This union resulted in 5 folded eared kittens and signified the birth of the Scottish Fold cat breed.

Mary and William Ross are credited for developing the breed and obtaining registration with the Governing Council of the Cat Fancy (GCCF) in 1966.

Their three-year breeding program resulted in over 70 kittens. Of the kittens born, 34 had straight ears and 42 had folded ears.

The Scottish Fold cat breed's popularity in Britain was short-lived. 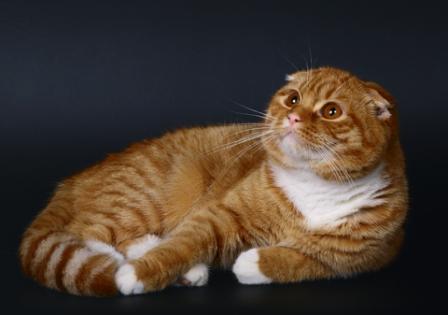 Mary Ross was concerned about the survival of this cat and in an attempt to preserve this rare cat breed.  Most of the British 'stock' was sent to the United States in 1971.

An American geneticist Neil Todd took up the cause.

It was determined that these genetic abnormalities could be avoided via extremely careful breeding through increased outcrossing and developing a wider gene pool.

To this day, outcrossing to British and American Shorthair is fundamental to any breeding program.

Whilst the cat did find its way back to Europe in 1982, it is not recognized by the GCCF or FiFe and remains a rare cat breed in Europe.

The cat of Scottish origin is today largely regarded as an all-American cat breed!

Breeders in the United States continued with experimental breeding programs.

The Highland Fold resulted from a cross with a Scottish Fold and Persian cat and is also referred to as the Longhaired Fold. 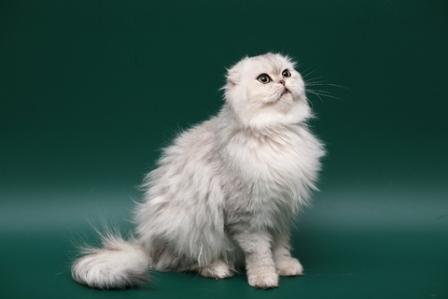 The resultant cat had folded ears and a curly coat. This is an extremely rare cat breed and not recognized by the major cat breed associations.

In the United Kingdom the cat referred to as the Coupari is in fact the Scottish Fold cat breed!

Breeding with Scottish Fold cats is a labor of love and patience as most litters will produce 50 % folded ears and 50 % straight ears.