The story of the Ragdoll Cat starts in 1960, in Riverside, Los Angeles, California.

Josephine, a beautiful white Angora-type feral cat made her home with Mrs Pennels. Over the years, Josephine produced several litters of kittens, but like their mother, they all inherited the wild feral characteristics. 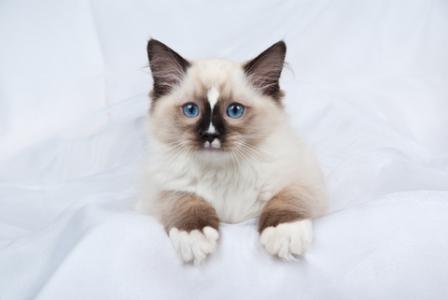 In 1965, Josephine was involved in a road accident during which she sustained several injuries including a fractured pelvis.

Fortunately she was taken to a vet and recovered fully before returning to Mrs Pennels.

After the accident, Josephine went on to produce several litters.

Ann Baker, a neighbor of the Pennels acquired three of Josephine's kittens:

These three cats were not Ragdolls, but were to become the foundation cats for the Ragdoll cat breed.

In 1965 Daddy Warbucks and Buckwheat were mated and produced a seal mitted cat called Kyoto and a seal colorpoint called Tiki.

These were the first cats that were registered as Ragdoll cats.

Mrs Baker continued with here intensive breeding program and it wasn't until 1969 that she sold her first kittens, a breeding pair, to Denny and Laura Dayton.

The Ragdoll got its name from the rag doll toy - when handled some cats have a tendency to relax and become slightly limp like a rag doll.

Note: It's simply indicates that the cat has total trust in its human, and is not a genetic 'mal-function'.

Mrs Baker however attributed this to something far more mysterious and so the myths surrounding the Ragdoll evolved!

The eccentric Mrs Baker claimed that the Josephine only started producing 'floppy cats' after her 1965 road accident.

She believed that the kittens produced prior to the accident did not display this 'floppy' trait and that the fractured bones and pelvis had somehow caused her kittens to develop this 'limp' gene.

Clearly, genetics had nothing to do with it and experts attributed this relaxed and docile behavior to selective breeding.

Another ridiculous theory was that Josephine was taken to a laboratory after her accident.

Secret Government experiments were performed on Josephine, she was genetically altered (using skunk or alien DNA).

This resulted in the Ragdolls unique laid back temperament; their floppiness and a lack of all feeling for pain.

Since genetic alteration was not available in the 1960', this theory was also dismissed.

Mrs Baker also claimed that Ragdoll cats were insensitive to pain and showed no fear which meant that they were extremely vulnerable to external dangers and abuse! (What was she thinking!).

The only rational explanation to this is that because Ragdolls are laid-back, relaxed, uncomplaining and docile cats one is less likely to note that they are in pain or have suffered an injury.

They are certainly not resistant to pain! Their tolerance for pain is no different to any other cat.

One can only hope that experiments were not conducted to test Mrs Baker's outrageous theory!

Mrs Baker, it would appear made up stories as she went along.

She also claimed that the Ragdoll had fur which was completely non-matting and non-shedding.

This was one of her more logical theories.

They are less prone to matting than the Persian as their undercoats are less dense - but if not groomed they will matt.

Regular grooming does result in less shedding, but like all cats, they do shed!

The final straw for the cat community and registries was when she claimed that another cat breed which she had developed - the HoneyBear - was in fact genetically modified.

These cats she claimed were in fact part skunk and did not have a cat's skeleton!

All these wild stories and claims gained Mrs Baker much publicity, but sadly if it was fame and fortune she was after, she only achieved to bring the cat into disrepute and lost much credibility! 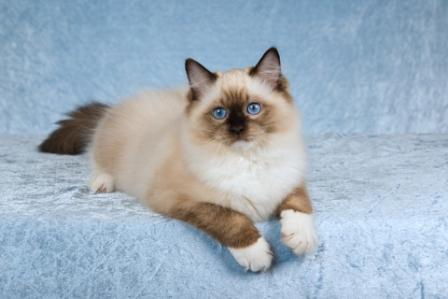 a changing of the guard

The restrictive Baker Regime became unbearable and in 1975 Ragdoll breeders had split into two camps:

The RFCI club was championed by Denny and Laura Dayton. This husband and wife team and the breeders that supported their views for breed advancement, are the real breed developers.

The Ragdoll cat's acceptance into the cat fancy is somewhat staggered.

Ragdolls landed on British and European soil in the the mid to late 80's, but it took some years for the breed to gain recognition.

The Governing Council of the Cat Fancy and the Federation International Feline finally acknowledged them in 1991 and 1992 respectively.

The Ragdoll is in the top 10 of the most popular cat breeds in the world.

It is also believed to be the largest domestic cat breed.

What a wonderful achievement for a cat that has its origin in free roaming cats of Riverside California.

Created by Ann Baker in 1971, this cat has not found acceptance in any of the major cat registries.

Despite extensive research we were unable to find any feline books that make mention of this cat in any depth.

Another Ann Baker creation that would appear to have followed in the footsteps of the HoneyBear.

In 1984 a another group of cat breeders broke away from Ann Baker's IRCA and established the Ragamuffin Cat.

They were unable to use the name Ragdoll as Mrs Baker had trademarked it.

Ragamuffins are descendants of the Ragdoll but were bred with Persian cats, Himalayan cats and domestic shorthairs which has resulted in the non-pointed variety and a wide range of colors.

This cat has found recognition in several cat registries around the world.