It is believed that the Manx cat breed originated on the Isle of Man, an island in the Irish Sea, located between Great Britain and Ireland.

This unique tailless cat was named after the Gaelic language which is spoken on the island. (Like its feline namesake, the Manx language is rare and spoken by a minority on the Isle of Man). 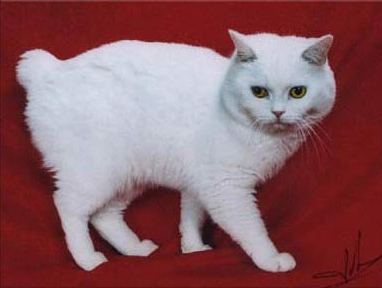 There is much speculation regarding the actual origin of the Manx and how it happened to arrive on the Isle of Man.

We have read much about the Manx cat origin. Some of the stories are very colorful, bordering on the ridiculous whilst others are more plausible.

The myth goes, that Noah, in his haste to herd all the animals on board the Ark, accidentally closed the door on the tails of two domestic cats, severing their tails and leaving them tailless for evermore.

The other tale is that some tiresome dogs bit off the tails of two domestic cats as they were leaving Noah's Ark. These cats then set out on a marathon swim until they reached the Isle of Man.

In days gone by many people believed that the Manx cat breed was in fact the offspring of a mating between a male rabbit and domestic cat!

A cute story, but not genetically viable.

During our research we found that the Norse who were of Scandinavian origin did inhabit the Isle of Man.

Their Viking warriors are said to have cut off the tails of the domestic cats inhabiting the island using their tails for helmet plumes.

Whilst this may very well have occurred, docking tails does not result in future cat generations being born tailless or with short tails.

Some people believe that it is possible that ships from the Crimea docked at the Isle of Man and left some of their tailless ship cats on the island.

Cats with short tails are not common to Europe, but are native to East Asia.

The theory that short or tailless cats arrived at the Isle of Man from East Asia via the trading routes is possible.

The argument that disputes this theory is that the bobtailed cats from Asia carry a different gene to Manx Cats.

There is also the possibility that tailless cats were brought ashore by sailors when their ship was wrecked off the Isle of Man in 1588. 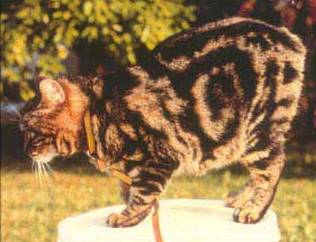 The fact is that over hundreds of years, many ships from many countries have docked on the shores of the Isle of Man.

The parent to the Manx cat breed could have its origin in any of the ships cats that landed on the island.

We can only conclude, that since the Manx Cat gene is rare or absent in the rest of the world, that this is truly a rare cat breed from the hills and valleys of the Isle of Man.

The first documented history of this cat starts in 1810, but writings do date back to the 1750's.

Britain founded the first Manx Cat Club in 1901. This cat breed is recognized by all major cat registries across the world.

It arrived in the United States in 1908, or thereabouts, and received recognition in the 1920's.

These were generally considered undesirable and the runts of the litter!

It was not until 1960 when Blair Wright (A Canadian Cat Breeder) and Leslie Falteisek (an American Breeder) decided to 'fix' this characteristic and start a selective breeding program with these semi-longhaired cats.

It is not confirmed how this semi- to longhaired gene came about.

Ms Wright is credited for naming the cat, Cymric, which is a Celtic or Welsh language and the Welsh name for Wales.

The Cymric and Manx cat breed standard is identical apart from the major differentiator, the coat length.

Most major cat registries recognize this cat breed. Some do however, see it as a Longhaired Manx and have revised the Manx breed standard and dropped the name Cymric.