The Maine Coon cat is said to have originated in the State of Maine.

Maine is situated on the Northeastern seaboard of the US and is known for its forests, lakes, mountains, jagged cliffs and a rugged coastline.

Summers are moderate, but winters are snowy and cold and the northern parts of Maine have severe winters. With a terrain and climate this harsh, it takes a special cat breed to survive the environment - what better than the hardy Maine Coon! 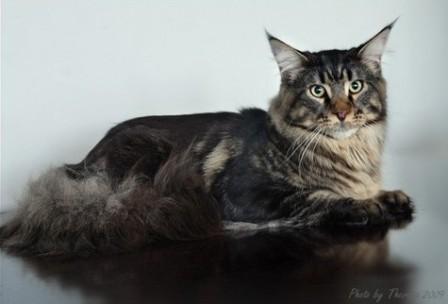 The origin of Maine Coon cats is shrouded in mystery. Many theories, folk tales and myths abound - we will leave it to you to decide which one is feasible.

The story goes that the Maine Coon originated as a result of a mating between a domestic farm cat and a raccoon.

This is most certainly a myth and is genetically impossible. The Maine Coon's striped, bushy tail is what probably inspired this story!

the bob cat and house cat

Another theory is that the cat is the result of a mating between a bobcat and a domestic house cat, but certainly not a claim that the experts believe to be true.

Some people believe that the Maine Shag originated from house cats that turned feral after they were abandoned.

In order to survive the harsh Maine climate, they developed heavier bodies and thicker coats to protect themselves.

the queen and the cat

Marie Antoinette was planning to escape France to the US during the French Revolution.

She sent 6 of her prized Angora Cats from France to the US.

The cats managed to cross the ocean to safety. It is believed that they mated with Norwegian Forest Cats on their way across, resulting in the American Longhair.

The Queen never made it across - she was beheaded!

vikings and the longhaired cat

It's also feasible, that Viking soldiers brought cats with them from Norway. The Maine Coon closely resembles the Norsk Skogkatt (Norwegian Forest cat) of Northern Europe.

sailor coon and his longhaired cats

A sailor, by the name of Coon, had a bevy of Angora and Persian cats. It is believed that their mating resulted in the longhaired, Maine Cat, called 'Coon Cats'.

The most believable story is that they originated from the union of Shorthaired Domestic Cats, Persian cats and Angora cats.

The truth is, that the ancestral origin of the Maine Coon cat is unknown.

What we do know for certain is that the cat is over a century old.

Records show that as far back as 1860 these domestic cats were shown at cat shows across the United States of America.

In 1895, it was the most popular cat and won numerous accolades at shows.

By the early 20th Century however, this magnificent cat had slipped into obscurity.

In the 1950's, the breed was revived and in the 1960's the Maine Coon was once again entered into competition.

The 1980's saw one of the largest domestic cat breeds been exported to Europe where it quickly gained recognition from both the GCCF and FiFe.

Today it holds the very important 2nd spot as the most popular cat breed in the world. (Pampered Persian cats hold the prized position). 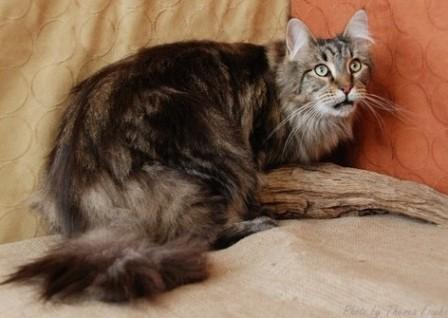 If you are considering Maine Coon adoption, you may want to visit a resource dedicated to this magnificent cat.