The Kurilian Bobtail cat with its fluffy, short-tail originates from a cluster of islands called the Kurile Islands.

These islands separate the North Pacific Ocean from the Sea of Okhotsk.

There are over 50 islands in this volcanic archipelago and whilst there is a dispute between Russia and Japan regarding the ownership, all the islands would appear to fall under Russian jurisdiction.

This Russian / Japanese 'connection' is an interesting one, as it raises the question as to whether the Kurilian is an ancestor of the Japanese Bobtail cat?

about the kuril bobtail history

The wild Kurilian Bobtail cat roamed these islands for decades prior to becoming domesticated.

They were first identified in the 1950's and then found their way to the Russian mainland in the 1980's.  It is believed that scientists or military personnel brought them to Russia.

They were first shown at Russian cat shows in the 1990's, recognized by the World Cat Federation in 1995, FiFe (Europe) and  The International Cat Association (TICA) in 2003. At this stage, the Cat Fanciers Association (CFA) does not recognize this cat breed.

The Kurilian Bobtail cat is a rare cat breed beyond Russia. This breed is also known as the Kuril Bobtail or the Kunashir Cat.

about the pom-pom tail

This Russian bobtail is a natural breed, meaning that humans played no part in its development.

The Kurilian's short tail is as a result of a genetic mutation.

Effectively this means that if a mating occurs between a 'normal-long-tailed' domestic cat and the Kurilian, all the offspring will have shortened tails - some angulated and some with the distinctive pom-pom tail. (As a matter of interest there are no permissible outcrosses) 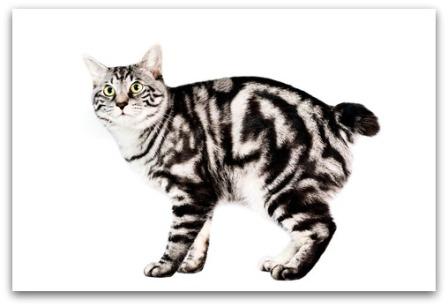 The tail must be a minimum of 2 vertebrae long and a cat with no tail is unacceptable.

The tail should have one or more curves or kinks and it can be either flexible or rigid or both. (The base of the tail should always be flexible).

The tail can face in any direction and the fur on the tail can appear as a brush or a pom-pom.

The Kuril Bobtail's cute tail is described as a whisk, a snag or a spiral.

The Kurilian is a large cat with a somewhat 'wild' appearance. It has firm, well developed muscles and a substantial and solid bone structure.

It has a slightly arched back and its rump appears higher than its shoulders. Its medium length legs complement the body and are strong and solid with prominent thighs.

The Kurilian Bobtail cat has a large head with rounded contours, a broad straight nose, a well developed and wide chin and muzzle.

It has large eyes that are walnut shaped  i.e. rounded at the bottom and oval at the top.

Eye color has no relation to coat color, but the color must be brilliant and clear. Vans, harlequins and white cats may have odd eyes (1 brown and 1 blue) or blue eyes.

To complete the picture, its ears are erect and the tips are rounded and tilted slightly forward.

Its coat comes in 2 lengths:

The semi-long fur lies flat with very little undercoat and is fine and silky to the touch. The tail coat is plumed and full. Cats with a ruff, toe tufts and britches are preferred.

The short fur lies flat, has very little undercoat and is also fine and silky to the touch. The fur on the tail will be the same length as the rest of the body.

Apart from colorpoint, cinnamon (fawn), chocolate (lilac) which are not permitted, you can expect to find the Kurilian in all traditional, naturally occurring colors and patterns - solids, tortoiseshell or tabby.

The Kurilian Bobtail cat is best suited to outdoor living. Outdoor does not mean pounding the pavements, but rather a safe and enclosed garden that is escape-proof.

They can adapt to indoor living, but it's important to provide a suitable cat- friendly environment for them as they do like space and prefer not to be confined in a small apartment.

They make great companions and get on well with older children and other pets.

The Kurilian Bobtail cat is a well balanced, intelligent cat that is easily trained.

They have excellent natural hunting skills and make excellent mousers.

They are also known for their love of water.

Kurilians are gentle, non-aggressive cats - easy going and affectionate. They love a warm lap and a cuddle.

As they are quite sociable, they do not tolerate solitude well. Their inquisitive nature means they will always be at your side and want to be involved in all activities.

They may observe all the household activities perched on the highest point they can find.

Weekly grooming for shorthair cats and twice a week for longhaired cats is recommended.

They are low maintenance cat breeds. We have excellent cat care information with tips on cat grooming, do take the tour. 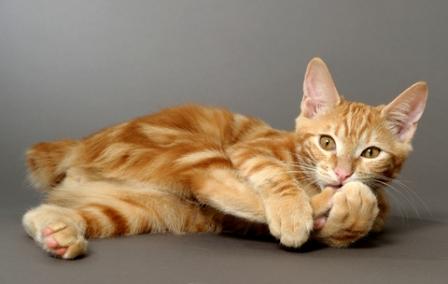 This is a healthy robust and hardy cat breed with few if any health concerns.

A balanced diet and exercise and an annual check-up at vaccination-time will keep your Kurilian Bobtail cat in good health.

Your kitty needs the best cat food you can afford. There are so many options - dry kibbles, canned cat food and of course raw cat food.

Your cat should always have access to fresh drinking water. 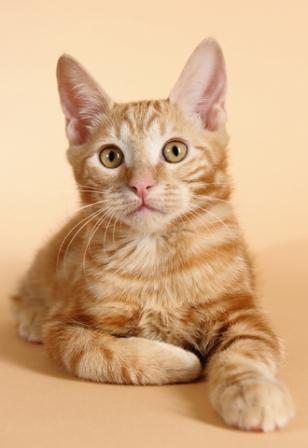 life expectancy of the kurilian bobtail

The average life span is 15 + years - long life expectancy. The breed is slow to mature.