California Spangled
Inspired By the Wild Cats of Africa

So what was the inspiration behind the development of the California Spangled Cat? 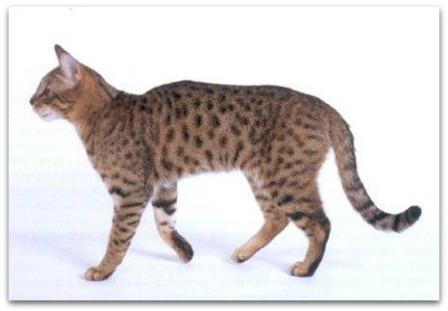 In the 1970's, Paul Arnold Casey Jnr, an author and Hollywood screenwriter, visited the anthropologist Louis Leakey in Africa.

Casey was drawn to the plight of the African wild cats, particularly the Leopard that was being indiscriminately poached for its fur or killed because it was hunting livestock on land that was previously wild-cat territory.

On his return from his trip to Tanzania, Casey, encouraged and inspired by Leakey, initiated a breeding program.

The purpose of this program was threefold:

The breeding program commenced in earnest in the mid 1970's.

Several cat breeds were used to 'engineer' this cat.

There seems to be some debate on which domestic cats were used, but the commonly held belief is that it included:

and an Angora-like spotted tabby

It took many generations of breeding before the breed type was fixed.

Unbeknown to Casey, Virginia Daly had already made huge inroads into the development of a wild-looking spotted cat.

Daly launched her beauty, the Ocicat, at a cat show in 1986.

Casey launched his cat in 1986, in an elaborate, campaign!

His 'creation' was showcased to the world in the Nieman Marcus Christmas Catalog at a premium price.

It apparently infuriated anti-fur campaigners who disapproved of a cat being advertised in a catalog selling fur coats.

Cat Breeders were furious as the breeding program was conducted without external observation or the blessing of cat registries.

Nieman Marcus was also angry when they realized that the advertisement was in fact intended to discourage buyers from purchasing fur coats!

Despite the cat's beauty and Casey's good intentions, the launch was a disaster from which the cat never truly recovered.

the end of a breed

Whilst many rumors abound that breeding may be revived, the California Spangled cat has become a 'ghost breed' with almost all breeding abandoned.

This is a very rare cat breed and despite an extensive investigation we were unable to find a single cat breeder.