British Shorthair cats first gained popularity as the 'Cheshire Cat' that appeared in Lewis Carroll's 'Alice in Wonderland' in 1865.

Their ancestry can be traced back to domestic cats in ancient Rome over 2000 year ago. It is thought that they found their way to Britain when the Romans invaded the country in AD 43. 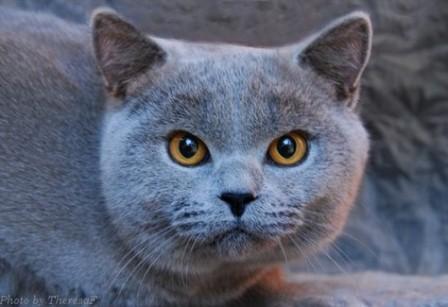 These docile cats, with their amazing physical strength, are descendants of farm cats prized for their hunting prowess.

Whilst they now come in an array of colors, the original was a blue cat, hence the name British Blue.

In the early days they so closely resembled the Chartreux cat, that certain cat registries combined the two cat breeds into one category.

New colors were introduced by crossing the blue cat with Persian cats.

With the introduction of new colors, the cat was renamed British Shorthair.

The longhaired gene was introduced during the development of the breed due to outcrosses with the Persian cat.

In the United Kingdom, the longhaired version is not classified as a separate breed, but in Europe they are known as the Britannia, whilst in the United States (and the Netherlands) they are referred to as the Lowlander.

Sadly, World War II proved devastating for this cat and most other cat breeds.

During the 1970's dedicated breeders worked tirelessly to re-establish the breed.

The cats we see today were developed using the Russian Blue, Chartreux Cat and Persian Cat - this was needed as the gene pool was hopelessly depleted after the war.

The breed is now well established and growing in popularity. 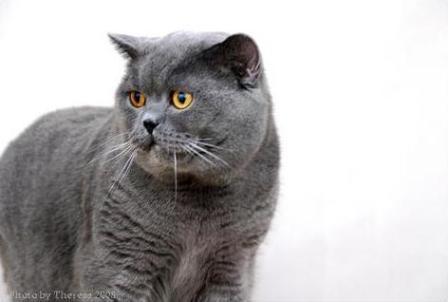 The British Shorthair is a well rounded cat. It is described as a semi-cobby, large, muscular and powerful cat with a sturdy torso, firm muscles and a substantial bone structure.

Because the neck is short, thick and muscular, it looks as though it has no neck. Its tail is moderately long and thick and the medium short legs and round paws complement the body.

It has a large, round head with chubby cheeks, short broad nose and well developed chin and broad,  rounded muzzle.

You guessed it, the eyes are round and large and the color of the eyes conforms to the coat color, but the color must be brilliant and intense.

It has relatively small ears which are wide-set with rounded tips.

The coat is dense, and plush. The hair is straight and short and the texture is firm and crisp.

Because the hair is thick, it tends to stand away from the body.

The hair is straight and flowing and the coat is fluffy and plush and stands away from the body.

The cat comes in a wide range of colors and patterns: 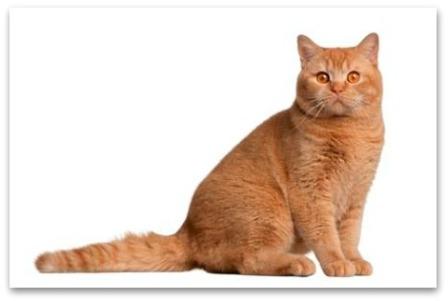 British Shorthair cats adapt well to apartment and indoor living. They are not very active and provided they have adequate space for exercise, they will be happy indoors.

Kitty can be allowed outdoors, provided it's into an enclosed, escape-proof garden.

How well do they adapt to children?

British Shorthair cats are tolerant of children, but they do prefer older, calmer children. These cats do not enjoy being carried around or handled roughly. Actually, all cats need to be handled gently.

Is this cat animal friendly?

They do get on well with other cats and cat-friendly dogs.

A calm and tranquil environment would suit them best. Never rush a Brit. They love to relax and snooze which makes them ideal companion cats for the elderly or a smaller family.

British Shorthair cats have the most wonderful, calm and easy-going temperaments.

Their placid personality combined with great intelligence has made them a hot favorite amongst film makers and television commercial producers.

They are large cats, who prefer to have their feet firmly on the ground.

They are not hyperactive which means you will not find them performing acrobatics - they do occasionally have active moments, especially when they're on the hunt!

These cats are gracious and prefer to observe family activities rather than get involved.

They are certainly not aloof - they are affectionate and friendly cats who prefer to cuddle-up next to their owners rather than being lap cats.

'Brits', as they are affectionately called, can be shy and reserved with strangers (aren't we all?)

If you are looking for an undemanding cat that can tolerate solitude, then the 'Brit' is the ideal cat for you. 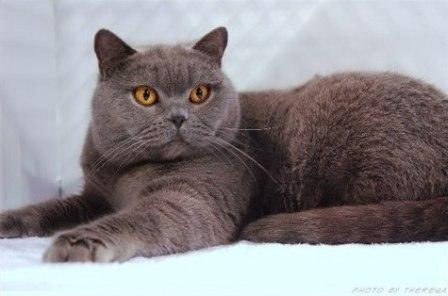 The shorthaired version is a low maintenance cat. A weekly brush to remove dirt and grit and maintain a lustrous coat is all that is needed.

The longhaired variety will need to be brushed daily. In general, these are medium maintenance cat breeds. They are easier to groom than other semi-or longhaired cats as they have no undercoat and are not prone to matting.

They are prone to hairballs, so they do need frequent grooming (this applies to the long and short haired variety).

If you are a novice, then do visit our cat care guide for some great tips.

The British Shorthair is a healthy cat breed.

Some lines are prone to:

The biggest concern with 'Brits' is their tendency to become over-weight. 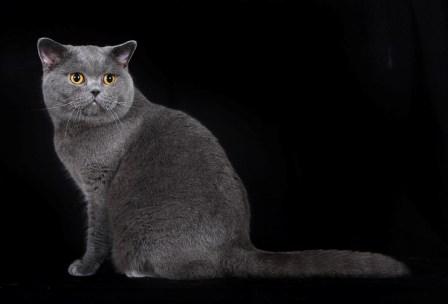 British Shorthair cats are prone to obesity and hairballs.

There are special commercial diets that can assist in reducing hairballs and controlling weight.

Do not over-feed your cat and limit treats.

Apart from a high quality cat food, do remember to provide your cat with fresh, clean water daily.

The average life span for these cats is between 10 - 20 years.