The Sacred Cats of Burma, better known as Birman Cats, could be the descendants of longhaired white cats that were kept by Buddhist priests as companions. The cats were considered sacred and charged with guarding the temples. 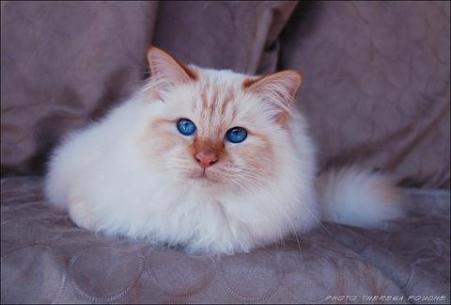 These longhaired, snow-white, Temples cats with golden eyes were also considered the 'caretakers' of the souls of priests who died.

It was believed that the spirit of a dead priest would enter the body of one of these revered cats and when the cat eventually died, the priest would be reborn.

Also housed in the sacred temple was a beautiful golden statue of a goddess with sapphire-blue eyes who presided over the souls of the dead.

The legend goes that a beloved priest lay dying and to comfort his master, the white longhaired cat placed his paw on the dying man and looked into the sapphire blue eyes of the golden goddess.

As he did so, the cat's coat took on the golden tones of the statue, its eyes turned sapphire blue and the paws that stayed in contact with the priest remained as white as snow.

The priest's beloved cat stayed with him refusing all nourishment. The cat finally succumbed, taking his master's soul with him to the next life.

With the older priest departed, the white temple cats surrounded the youngest priest and as they did this, the white cats took on the transformed colors of the departed cat. This signified that the successor was chosen.

The history of these cats is obscure. The experts are not entirely sure how these cats got from the temples in the mountains of Burma to the streets of Paris.

One theory is that two soldiers returning from Burma were given two white temple cats as gifts for saving a temple from being destroyed by rebel groups.

The female cat survived the voyage to Paris, but sadly, the male cat died on route.

Fortunately, the female was pregnant and her kittens are thought to have founded the breed in Europe.

Whilst this story is plausible, records reveal that the two soldiers were in SE Asia in 1898 and the cats were sent to France in 1919 making this theory unlikely.

Some believe that the 2 cats were in fact stolen from a temple in Burma, given to the American millionaire Vanderbilt, who in turn gave the cats to a breeder in France. 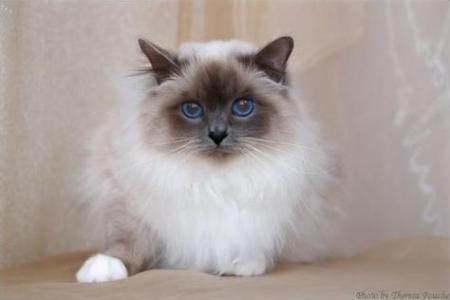 Experts believe that the Birman cat was the first pointed long-haired cat breed.

There is mention of another pointed longhair called a Khmer which was brought to France from Indochina in the 1920's.

We are unable to find any information regarding this cat and it would appear that it was 'absorbed' into the Persian Colorpoint breed. (During the late 1920's, breeders crossed Siamese cats with the Persian cat and created the Himalayan - a long-haired pointed cat).

Post World War II, only two of these sacred cats remained, apparently wiped out by feline diseases and the devastating war.

In order to save the breed from extinction, an outcross program was started to re-establish the breed.

Colorpoint Persians (also known as Himalayans) were introduced into the breeding program to limit inbreeding.

In 1950, the breed was named Chat Sacré de Birmanie.

It is probably safe to say, that nobody knows where these gorgeous cats originate from.....and does it really matter?

This is a beautiful cat, a very popular breed and highly prized.

Note: Some people refer to them as Burman cats (probably referring to Burma) - this spelling is incorrect.