The Bengal has its roots in the Southern Asian jungles of India, Bangladesh and the Southeast Asian mainland.

This is a hybrid cat breed, developed by mating a captive Asian Leopard cat (prionailurus bengalensis), with a black domestic cat. 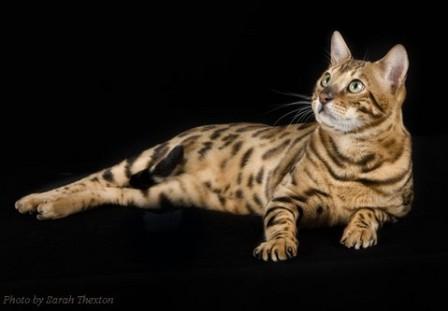 To develop their spotted coats, the Egyptian Mau and street cats from India were introduced into the breeding program.

It was originally know as a Leopardette, but the name was later changed to one more closely linked to its scientific name.

We have heard people refer to them as the Bengal Domestic cat or Bengal House cat.

The existence of this cat is credited to Jean Sugden-Mill from the USA.

She purchased an Asian Leopard (miniature leopard) in 1963 and crossed it with a queen American Shorthair domestic cat - the result, a cat with the physical features of a wild cat, but the wonderful temperament of a domestic cat!

Due to personal reasons, she put her breeding program on hold.

The interest in and the attraction to the Asian Leopard did not stop here.

In the early 70's, Dr Centerwall of the University of California conducted research on hybrids of the Asian Leopard, but found that the resistance to feline leukemia did not pass beyond the first generation.

With the discovery of a vaccine for this cat disease, research was abandoned and the kittens involved in the research given to Jean Mill who revived her selective breeding program.

The Asian Leopard was also crossed with other breeds of domestic cat i.e. Abyssinian cat, Egyptian Mau, Siamese cat and Burmese cat to create new lines of the Bengal.

Another fascinating fact about this hybrid cat is that the offspring of wild cat crosses (i.e. cross-species breeding) are normally sterile, but not so in the Bengal.

In the initial breeding program the females were fertile and crossed with the sire to produce beautiful spotted Bengal kittens.

Cat registries began accepting the Bengal cat for registration in 1983.

Cat associations stipulated that outcrossing to the Asian Leopard would need to stop.  Only cats that are 4-generations (F4) removed from the domestic/Asian leopard cross would be permitted for stud (breeding).

What this means is that an F4 Bengal is considered a Bengal domestic cat whilst the F3, F2, F1 are considered 'foundation breeding cats' as they are still too closely related to the wild leopard.

laws on keeping a bengal

Potential Bengal owners need to establish what the law states with regards to keeping early generation or F1 to F3 Bengals - it appears they are not considered 'domestic cats'.

Our recommendation is that you check with your local authority (by-laws) and state laws before investing in these magnificent cats.

Some States/Counties appear to allow ownership of Bengal cats that are F4 and above.