American Shorthair Cat
Made in America

The American Shorthair cat is a robust and powerful cat that was once known as the Domestic Shorthair.

Originally this cat was kept purely to protect and keep homes and barns free of rodents. These agile and keen hunters proved to be excellent mousers. 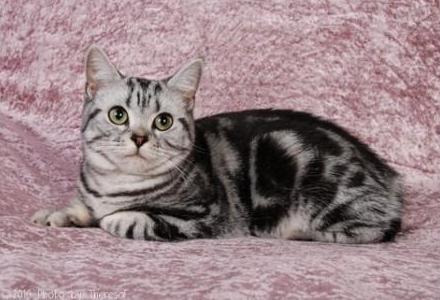 Digging through the archives, records show that the Domestic Shorthair inhabited the North American continent for centuries - some experts believe  as far back as 400 - 500 years.

The ancestors of the Domestic Shorthair are said to be the British and European Shorthairs that arrived in America with the early settlers.

Records indicate the sailors kept these working cats on board their ships to hunt rats.

On land, these hardy cats adapted well to the climate and environment of the Northern States of America.

To survive, nature ensured that these cats grew a little larger (probably to protect and allow them to defend themselves against smaller predators).

Their coats also underwent a change, becoming thicker and harder, thus acting as a barrier to injury, the cold and rain.

The early settlers, much like the sailors, used these domestic cats to protect the contents of their barns and homes from rodents.

the making of a breed

The first Domestic Shorthair was shown at a cat show around 1896 when there were only a handful of recognized cat breeds.

The cat received a very positive response, but it wasn't until the early 1900's that breeders set out to improve the breed.

As the cat gained popularity, the breed was improved via a selective breeding program, using 'alley cats' and imported breeds such as the Persian cat, Burmese cat breed and European and British Shorthairs.

It was only in 1966 that the Domestic Shorthair became officially recognized and it was then that it was renamed the American Shorthair cat. There were a number of reasons for doing this:

Despite its years of existence, the American Shorthair cat is relatively unknown outside of the United States, where it is ranked as one of the top ten most popular cat breeds.

Understandably, in Europe, American Shorthairs compete against the British and European Shorthairs for popularity.