The American Curl
The Origin and History of the Cat 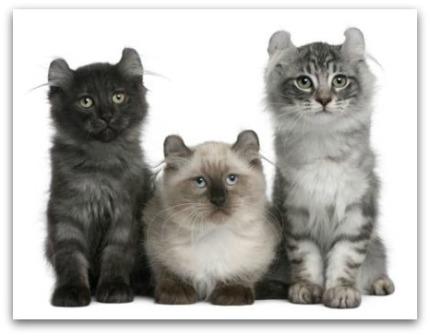 On a hot summer's day in June 1981, two 6-month old stray kittens arrived on the doorstep of Joe and Grace Ruga, of Lakewood.

Both kittens, one a solid black, the other a bi-color black and white, had long hair and curled ears.

Panda, the bi-color kitten decided to continue on its travels, but the black kitten, named Shulamith, made the Ruga's home her own.

In 1982 Shulamith gave birth to 4 kittens, 2 of which inherited her curled ears.

Shulamith became the foundation female of the curly-earned cat breed.

These unusual domestic cats were first shown at a cat show in 1983 in Palm Springs. The cats attracted so much positive attention that it was decided to develop a new cat breed.

In 1983, the Rugas and their friend Nancy Keister, began a selective breeding program with these sweet-faced cats with distinctive, rolled back ears.

Basically, it is an inherited genetic trait and a spontaneous mutation, meaning that any cat with even 1 copy of the gene will show the trait.

Once it was reported that the cats suffered no other defects or ill-effects, cat breeders became inspired to continue with their breeding programs.

By 1987, TICA awarded the breed championship status and the CFA followed in 1993.

To our knowledge, GCCF and FiFe do not accept the breed due to their policy of excluding new cat breeds with either cartilage or bone 'abnormalities'.