The American Bobtail
History of a Short-Tailed Cat

The American Bobtail Cat was discovered in Arizona - situated in the south-western region of the USA.

It was on one of these Indian Reservations that this unusual, short tail cat  has its origin. 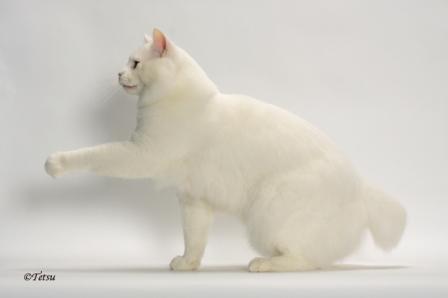 It is believed to have been around 1964 when John and Brenda Saunders, of Iowa were on vacation in Arizona near an Indian Reservation.

Whilst there, they found a wild-looking, brown tabby kitten with a short, upright tail.

They were absolutely fascinated by this unusual kitten, so much so, that they took him home. They called him Yodi.

Yodi was eventually mated with the Saunders' seal point Siamese cat. Later on, one of the kittens from this union was crossed with a cream-colored cat and a new cat breed was born.

Sadly, due to excessive inbreeding these cats largely died out.

Many years later - between 1980 and 1990, Reaha Evans and Lisa Black started work on a breed similar to Yodi in appearance.

This short-tailed cat was eventually accepted by both the CFA and TICA for champion status. Most major cat breed associations recognize the breed, albeit as recently as 2006.

the facts about the short tail

An unsubstantiated theory is that this short-tailed cat breed was the result of a cross-breeding with a domestic tabby and a wild bobcat.

This theory is in fact linked to the Pixie Bob.

The short tail is in fact a spontaneous, genetic mutation from a dominant gene that occurs amongst domestic cats from time to time.

The breeders that we chatted to confirmed that there is absolutely no Bobcat or wild cat involved in breeding these domestic bobtail cats.

Over the years, the breed has changed in appearance. The original bobtail had a short coat, but following the introduction of Color-Points (Himalayans) into the cat breeding program, the coat became medium length.

This domestic cat has been 'modified' and a 'new improved' cat is shown today, which is sweeter but one that has retained the 'wild-look'.